A bitter dispute has erupted between the partners of Angela Merkel’s coalition over who to appoint as president of the powerful economic council which advises the German government, a sign of rising political tensions ahead of the legislative elections.

The post will remain vacant once Lars Feld leaves the council of economic experts at the end of the month, after Finance Minister Olaf Scholz, a Social Democrat, blocked the economist’s appointment for a third term, against the will of Merkel’s party, the Christian Democratic Union Party.

The argument is a sign of the deep ideological differences between the CDU and the SPD over fiscal policy which are expected to intensify in the run-up to the September Bundestag elections. Feld opposes state involvement in the economy, favors tax cuts, and champions debt brake, a rule anchored in the German constitution which caps public debt.

The brake, which limits Germany’s budget deficit to just 0.35% of gross domestic product, was suspended last year as Berlin increased spending to deal with the economic fallout from the coronavirus pandemic. The government has assumed 130 billion euros of debt in 2020 and plans to take 180 billion euros this year, the largest amount in its post-war history.

CDU wants return to old tax rules as soon as possible, while many SPD members, and some left-wing economists, would like the brake to be reformed to allow for greater investment in public services.

A person close to Scholz said his motivation for blocking Feld, who has served on the panel for 10 years and as chairman since March 2020, was to inject “fresh blood” into the body. He said there have only been three cases in its 58-year history where a member has served more than two five-year terms. “It has nothing to do with Feld’s economic views,” he added.

But Feld himself has said he has angered many in the SPD by insisting that Germany quickly return to fiscal orthodoxy after its spending spree related to the virus.

“There are certain forces within the SPD who want more leeway and want to reform the debt brake,” Feld told German radio. He said the SPD’s “politicization” of the expert council had “weakened its independence”, a trend he “deeply deplores”.

Created in 1963, the expert panel is called in Germany the “five wise men”, even though two of its current members are women. It publishes an annual report on the state of the economy and plays a very influential role in shaping German economic policy.

The SPD has reportedly presented its own candidates for president, including Jens Südekum, professor of economics at the Heinrich Heine University in Düsseldorf, and Marcel Fratzscher, head of the economic think tank DIW, whose views are closer to those of the SPD. , in particular on the debt brake.

The blockade by Scholz of Feld, who teaches economic policy at the University of Freiburg, sowed consternation within the CDU. Armin Laschet, the party leader, described him as “one of the most renowned scholars of the social market economy”. 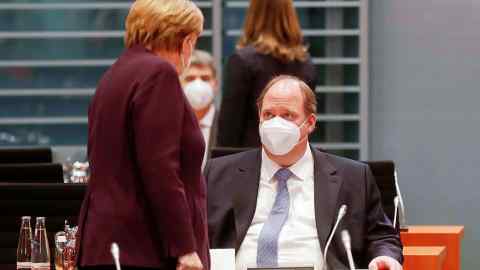 “In the midst of a pandemic, the SPD Minister of Finance is preventing, with arrogance and ignorance, [Feld] to stay on the expert board, ”he tweeted. “Particularly now, in this crisis, expertise would be more important than ever.”

Hans Michelbach, finance spokesman for CDU’s sister party, the CSU, said the SPD did not need advisers “but clickers for their policy of returning tax increases and public debt ”. He added: “Mr Feld stands in the way of this and therefore needs to be ruled out.”

Yet Scholz’s decision on Feld was hailed by many in his party. “Lars Feld embodies ideological neoliberalism,” said MP Cansel Kiziltepe, the party’s finance spokesman.